Larry and I have been announcing the parade on Broadway for several years. We love doing it, and enjoy establishing camaraderie with those watching along our section of the parade. A few years ago our Grand Marshal was David “Kid” Ramos, an internationally known and respected blues guitar player who grew up here in Anaheim and still lives here.

Larry always does some research on the Grand Marshal to get some interesting facts for the audience. When David was passing by, Larry gave his “color commentary”, and at the end he announced, “And most important and impressive of all, DAVID IS A CANCER SURVIVOR!” When David heard that, he stood up in the convertible and gave the audience a huge wave, and the audience went wild with cheers!

Hooray!! It was a great moment!

Editor’s Note: The Torgersons not only announce the parade each year, they volunteer tons of hours with the community to mount the festivities.  Be sure to look for some pictures of Dinah on her separate memory post, here are just a few of our own “Mr. Wonderful” master builder Larry over the years.

My earliest recollection of the Halloween Festival is when my daughter won best costume in her age group (she was dressed as a Capri Sun juice box) back in 2000 and I joined her on a float with the other winners of the costume contest. We sat on hay bales on a flatbed truck in the afternoon parade.

However, my fondest memories are from more recent years when I helped build many floats including Andy Anaheim and the Rocket Witch.

The Andy Anaheim build team was honored a few years ago when we autographed the wall mural of the float at the local Applebee’s.

Driving the Candy Box float was another fun experience until the battery went dead towards the end of the route and we had to push it the rest of the way.

I also enjoyed building games for the Fall Festival including the Plinko game and Four in a Row.

The camaraderie and sense of community during the time spent building floats is something I will always cherish.

In 1987 the Anaheim Halloween Parade once again came close to disappearing because of a lack of financial support for the then 60+ year old tradition. Earlier that year a group of downtown residents formed the Anaheim Neighborhood Association as a means to more effectively address issues we saw as threatening to our downtown neighborhoods. The more involved we got the more we realized that there was a lot more to improving and preserving our historic neighborhoods and quality of life of residents than just “fighting city hall”. You could fight, and even win sometimes, but to have a lasting positive impact residents got involved in non-political community, neighborhood, and city-wide activities. One of the first of those was the Anaheim Halloween Parade.          In October, 1987 we found out the Halloween Parade might not happen that year because they didn’t have the $13,000 for the insurance required by the city.  Eventually the city agreed to fund half the amount and loan the parade the other half. Ok, the parade was going to happen, but the loan still had to be repaid. We submitted the attached letter to the editor of the Anaheim Bulletin, then a stand-alone newspaper and the main source of local, city related news, to bring attention to the problem and to hopefully be part of the solution. 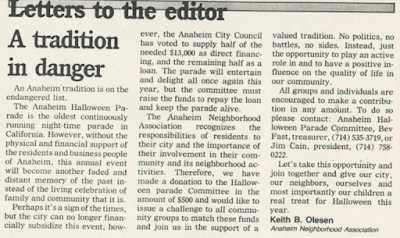 ANA donated $500 to the parade and made a “challenge” to other neighborhood groups and local businesses to match it. The Bulletin published the letter in the October 22 paper, along with an editorial of their own accepting the challenge, matching the $500 donation, and encouraging others to do the same. 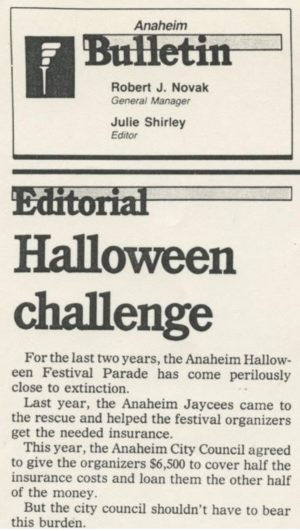 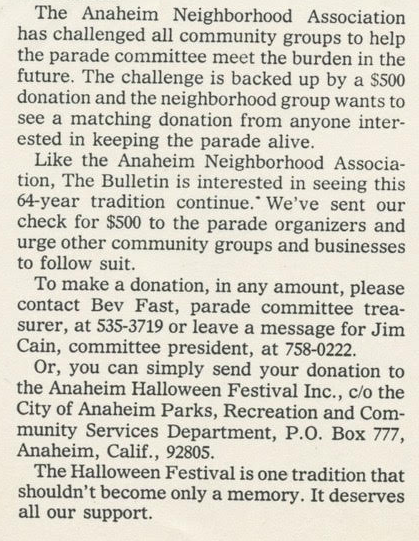 Since I was not part of the group who was putting on the parade in those days I have no idea what amount was finally raised, but I assume that through this and other fundraising efforts enough was raised to pay off the loan and allow the parade to continue. Amazingly (or maybe not), as we approach the 100th anniversary of the parade, some of the same people from that era are now again involved in the Anaheim Halloween Parade and one of the biggest challenges is, you guessed it, raising money to fund the Anaheim Fall Festival and Halloween Parade.Luckily today the parade has enormous support from residents, businesses (both large and small), as well as the City of Anaheim and has become one of the largest, most popular community events in the city. Hopefully that will continue to the 100th Anniversary and far beyond.

Most of us “Oldtimers” recall the Annual Halloween Parade marching from La Palma Park to Downtown, via Anaheim Blvd (old Los Angeles Street). In the years of 1952-1955, however, the Parade used Lemon Street instead.

During that time, our family’s neighborhood friends, the Florence’s, lived at 521 North Lemon, at the corner of Alberta Street.

They had two sons, Jimmy and Johnny, who hung around with my older brother David. They let me tag along.

The boys’ bedroom was upstairs, facing Lemon Street, and an open window, that allowed us to all scramble out onto the wide sloping porch roof to have a front row seat of the parade.  What a cool spot to watch from! No adults to get in our way; to this day, it’s still my favorite memory of the Halloween Parade. 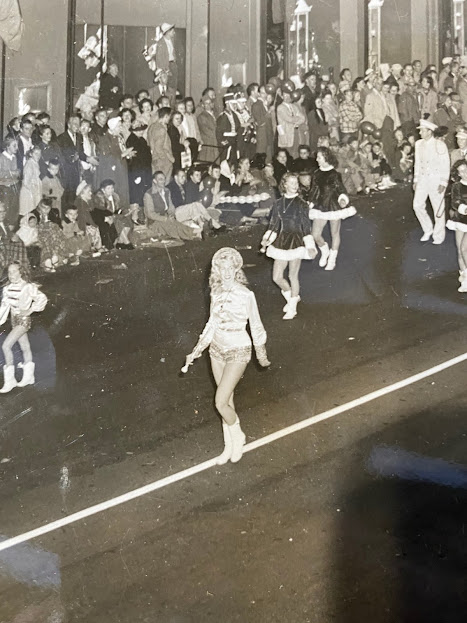 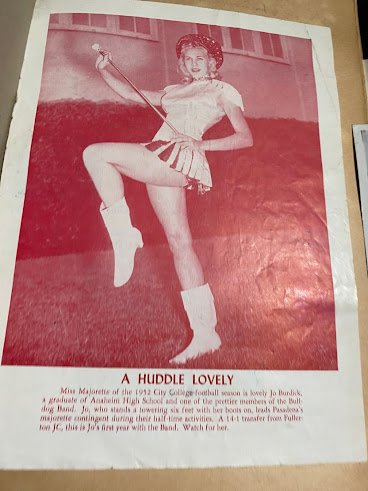 The year was 1950 and I was going to Anaheim High School - The AHS band was set to be the first to open the Halloween Parade and I was excited to be twirling my baton while leading the way. Mr. Ted Born who was the leader of the Elks Club band asked to speak to me-(  The Elks Club was known  then for having a fabulous band with many adult musicians ) Mr. Born told me he would like me to lead their band in the parade and I explained my obligation with leading the Anaheim High Band- He thought about it for a moment and then said "Jo, I think we can do this because I'm sure I can get you a ride from the end of the parade back to the beginning again if you are game" Knowing it was three miles beginning to end and I was in good shape I agreed. During this same year I was giving baton lessons to around twenty girls in exchange for dancing lessons from Dorothy Jo Swanson (A well respected dance teacher from Corona del Mar) She called around the same time and asked if I would lead the " Dorothy and Jo Majorettes" thru the Halloween Parade this year as well ! With many thanks to the Anaheim Police Department who provided the rides from parade end back to parade beginning , I started out leading the amazing Anaheim High Band then got back in the nick of time to the step off with the Elks Club at  parade middle. Then with another APD ride assist, I just made it to lead the "Dorothy and Jo Majorettes" marching up the route to end the parade. Both on the second and third times going down the three mile parade route I heard people shouting "Hey Jo didn't we just see you?' which I thought was quite funny. I think I might be the only person to have marched in the Anaheim Halloween Parade three times in one night.
Posted by ANAHEIM HISTORICAL SOCIETY at 12:00 AM No comments:

Washington Irving’s 1820 tale of a headless horseman terrorizing the village of Sleepy Hallow is considered one of America’s first ghost stories.  The History Channel’s Elizabeth Bradley theorizes Irving’s likely source of inspiration is a translation of the German poem The Wild Hunstman by Gottfried Burger.  It’s no wonder then that Anaheim’s Germanic Colonists would consider the story ample fodder for mining Halloween gold.

The Headless Horseman has made several appearances in the Anaheim Halloween Parade throughout the years.  Shown here as a charming paper-mache and metal pipe art sculpture in La Palma Park Stadium, 1949:

In 2015, the Horseman was presented “live action” as seen in the staging area for the parade at Broadway and Manchester:

And here, accompanied by the Anaheim Police Department’s Mounted Unit at staging for the 93rd annual Anaheim Halloween Parade in 2017:

Whenever the Horseman rides down the streets of Downtown Anaheim,

you know the Anaheim Halloween Parade isn’t far behind !

I remember walking one block to watch the parade every year while growing up just south of Broadway in the 60s and into the 70s.  The Shriners, the bands, but mostly the equestrians were all so exciting to me.

My dad would always yell out to the Sepulveda brothers, Del and Suki, as they rode by on their Spanish dressed horses in their vaquero best.  They always yelled “hello” back to him as the silver on their saddles and bridles jingled.  They were so impressive, every bit of silver gleamed under the streetlights and the leather was polished to a high gloss.  I looked forward to seeing them the most each year.

Posted by ANAHEIM HISTORICAL SOCIETY at 12:00 AM 3 comments: